"Birth of a Salesman" was the opening act to the play Redemption in Our State of Blues. It is based on a country bumpkin in the big city. With only a second grade education, he earns his living as a street peddler of counterfeit Goods. It begins with him strolling up and down the Boulevard, singing this monologue:

After being observed by a film crew, they approached him to film his street hustle. After receiving payment up front, he gives them a glimpse into the operations of a counterfeit Street huslter, who is forced to change his attire after every transaction. A police officer gets involved when he has to rescue Money Mike from the assaultive hands of two of his earlier victims. The tables quickly turn from his victims going to jail, to him going to jail. But before the handcuffs are put on, he shouts "Look!" and points to the film crew. "You're on Candid Camera! You know, Lente Loco, or Ashton Kushton's 'Punk.' Those camera guys gave me $200 to sell you fake stuff." Upon hearing this, the officer and victims go chasing after the film crew, who don't stick around to await an outcome. He celebrates this victory by mimicking Jean Kelly's whistle, movements, and song, "Singing in the Rain," in the 1952 movie Singing in the Rain.

Birth of a Salesman | Prisons Foundation

Birth of a Salesman (2015)
8.5 in x 5 in (21.6 x 12.7cm)
Wax & chalk on a prison cardboard lunch sack
Donald "C-Note" HookerYou can buy prints of "Birth of a Salesman" at the official website of Darealprisonart. Shop for canvas prints, framed prints, posters, greeting cards, and more.

Birth Of A Salesman by Donald C-Note Hooker
https://darealprisonart.pixels.com/featured/birth-of-a-salesman-donald-c-note-hooker.html

Or you can purchase the ORIGINAL, whose sale will support two 501(3)(c) non-profit charitable causes.

Scene One: Takes place in the woods and consists of half of the transitional and boys home cast. One of the transitional home members received a phone call that due to van trouble the other half had to turn back and will not make it. This means they will have to take on double the workload.

Storyline: Based on those who resent having to take on more responsibility versus those who are willing to do so for the greater good.

Scene Two: Takes place at the assisted living home. One of the residents has just died.

Storyline: Based on each individual's relationship with the deceased; along with personal introspection on how they have lived doing the long arc of their lives.

Scene Three: Takes place at the transitional home and consists of the half that did not make it to the woods.

Storyline: Based on starting something and not seeing it through, or getting in one's own way.

Scene Four: Takes place at the assisted living home, and involves the whole cast, delivering and decorating the tree.

Storyline: Based on coming together and community.

LIFE WITHOUT THE POSSIBILITY OF PAROLE (a prison play) 2016

C-Note's play is a work of fiction from one of the women in the article named Kay. Kay was 23 at the time, serving a sentence of Life Without the Possibility of Parole. The play begins with Kay inside of a courtroom holding cell, having just received her sentence of LWOP. There, she relies on other jail detainees to tell her what awaits her in prison. After 5 years in, she and her cellmate Carol sign up to participate in the 12-step program known as Alcoholics Anonymous. When the prisoners are being called over the prison guard intercom to notify them of being released from their prison cells for A.A., Kay's name was not called. Upon Carol's return from A.A., she informs Kay that prisoners with life without parole cannot participate in Rehabilitation programs. Kay, Carol, and Sissy, another prisoner with LWOP, agree that Carol will graduate from A.A., train them, and they will run A.A. classes during the prisoners' recreational time. When the women start their first class on the recreational yard, 30 guards run up on Carol, Sissy, Kay, and their students, and put them all in the hole, solitary confinement. After three days, the administration releases Carol out of solitary confinement. She is the only cellmate Kay has ever known, and leads to a stirring, emotional ending, when the two women are forced to separate, possibly, forever.

LIFE WITHOUT THE POSSIBILITY OF PAROLE (a prison play) | Mprisondpoetz
https://mprisondpoetz.wordpress.com/2016/12/18/life-without-the-possibility-of-parole-a-prison-play/

COVER ART:
Life Without the Possibility of Parole (2016)
9 in by 14 in
Collage and graphite on paper
Donald "C-Note" Hooker

You can buy prints of "Life Without the Possibility of Parole" at the official website of Darealprisonart. Shop for canvas prints, framed prints, posters, greeting cards, and more.

Life Without The Possibility of Parole by Donald C-Note Hooker

God Is A Woman was one of the many literary works by prisoners hoping to be published in the 57th issue of the Columbia Journal. Founded in 1977 by students in the Columbia University School of the Arts Graduate Writing program, it has featured works from Nobel laureates, National Book Award winners, newcomers, and unknowns. It's past issues have included writers such as Raymond Carver, Lori Moore, Kara Walker, Mary Karr, and Joyce Carol Oates.

Columbia Journal's Community Outreach Program aims to maintain and sustain space for those writers from vulnerable and at-risk communities who have traditionally been excluded from the larger literary discussion of art, taste, and scholarship. The outreach program actively questions and challenges today's formal thinking about what is considered "good writing", who are considered "serious writers", and whose stories should be read in literary magazines.In 2016, Heather Hadke at the Columbia Journal started the Incarcerated Writers Initiative (IWI), as a way to open the student publishing platform to writers in prisons across the United States. This population has been traditionally overlooked, undervalued, and pushed to the margins. The Journal believes the inclusion of these literary voices will enlarge and ultimately strengthen the artistic and scholarly community. Led by students and overseen by faculty advisors, the Incarcerated Writers Initiative is committed to supporting writers from all walks of life.

God Is A Woman is the condensed version of an unpublished short work of fiction by Donald "C-Note" Hooker. It is an original work that was specifically created to be published in Columbia University's a Journal of Literary and Art, Issue 57. This psycho-drama, love story, begs to answer the question, "What happens to the memories of prisoners who have been locked away for decades?" It takes its name from an Ariana Grande song of the same title, and is based on one of the authors earlier works that predates the lyrics to God Is A Woman, but is of a similar theme. Never published, because the author feared his writing would be perceived as blasphemy.

God Is A Woman | Google
https://docs.google.com/document/d/1rJSaI3b1QH6ydFziRaCJo_0SGg8xEKEGeRQVpjZ58fs/view?usp=drivesdk

You can buy prints of "God Is A Woman" at the official website of Darealprisonart. Shop for canvas prints, framed prints, posters, greeting cards, and more.

God Is A Woman by Donald C-Note Hooker
https://darealprisonart.pixels.com/featured/god-is-a-woman-donald-c-note-hooker.html 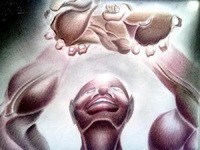 Fathers and Sons (A Play Written By Prisoners) 2017

Fathers and Sons (A Play Written By Prisoners) is a compilation of prison writers who crossed racial and gang lines to put together a theatrical Work for a wider audience. Conceptually, it is about intergenerational trauma. Whether it be Tuan Doan's, "Another Wounded Soul," where a son's question is finally answered as to why his father treats him differently from his brother. It ends with the shocking revelation he is not his father's biological son. This leaves a son seeking answers, but a cat has his mom's tongue; to Jerry Cooley's "Grandpa and Michael," where the son whose drug-addicted mother left him to be raised by her parents without the legal authorization to do so. When Sheriff's come knocking at the home of Michael's grandparents looking for him for murder, Grandpa lies to them telling them Michael was not there. Grandpa and Michael is a story of unconditional love in the midst of intergenerational trauma.

C-Note's "The Seed of Bonnie and Clyde (South Los Angeles Edition," is a story of a great high school hood romance, between C-Note and Ebony, and how he had gotten drawn into her family's penchant towards gang violence. It is an intergenerational tale of raising their son in the culture of the gang lifestyle, despite it being a destination towards an early death or imprisonment for life. It ends with Ebony sister's Loretta, because Ebony was killed in a shootout with gang rivals, bringing the high school sweetheart's grandson to Pelican Bay State Prison where C-Note has been incarcerated for the past 30 years. C-Note's disdain for Ebony's sister is apparent from the start, since she has never reached out to him in any form of communication during his 30 years of incarceration. His cynicism is so overwhelming, he dismisses the young man's eagerness to see him and to become him. In the end, he challenges the notion why anybody would want to be him, nor lead the life that has led him, shot up, crippled, imprisoned, and bitter.

Fathers and Sons (A Play Written By Prisoners) | Prisons Foundation

FATHERS AND SONS (A Play Written by Prisoners) | Mprisondpoetz
https://mprisondpoetz.wordpress.com/2017/06/16/fathers-and-sons-play-written-by-prisoners/

You can buy prints of "Dreams of the Fathers" at the official website of Darealprisonart. Shop for canvas prints, framed prints, posters, greeting cards, and more.

Dreams Of The Fathers by Donald C-Note Hooker
https://darealprisonart.pixels.com/featured/dreams-of-the-fathers-donald-c-note-hooker.html 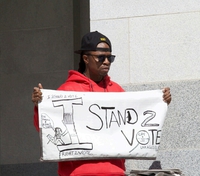 Written in 2019, I Stand2 Vote is a one-act-play of two opposing long time activist and politicians arguing the merits of restoring voting rights to the incarcerated and formerly incarcerated. It is set in
Sacramento, California, the state's capital, on the state's legislative branch's assembly floor. It was written by Minster King X, aka Pyeface, or the George Jackson of Rapp, and C-Note. Later in the year, Minster King X was released from prison after serving six years with the feds, and 18 years with the State of California.

In December of 2019, King and others performed the play at the First annual Ratcliff awards. In 2020, he would go on to record a hip hop track called I Stand2 Vote